There is a lot of uncertainty that faces security-focused cryptocurrencies. On September 12, Huobi Global said it was delisting several privacy tokens, including DASH. The company cited regulatory compliance in the move, which is expected to take off on September 19.

There is no debate that privacy coins have a place in the crypto sector. Users are seeking anonymity, and tokens such as DASH have subsequently flourished. However, there is a tug of war with regulators that could soon culminate in further delistings.

DASH has lost more than 7% in 24 hours since the delisting news came up. The losses, in addition to the delisting, occur due to market correction. Technical analysis indicates that DASH remains under the trenches. 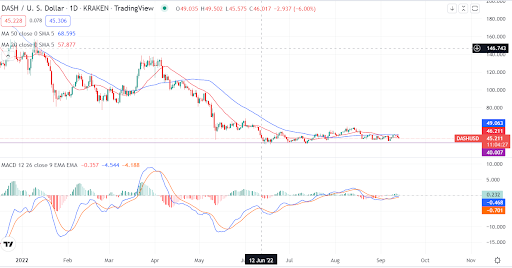 DASH lacks momentum at the current trading level of $45. The level is close to the support of $40. The moving averages offer resistance from above. Although the MACD indicator is above the moving average, it is in the bear zone. The low momentum could add pressure and force a decline of DASH to $40. Investors should be wary of further downside.

DASH has held above the $40 support but lacks the momentum to push higher. The upside could be curtailed further by the delisting by Huobi.

eToro is one of the world’s leading multi-asset trading platforms offering some of the lowest commission and fee rates in the industry. It’s social copy trading features make it a great choice for those getting started.

CFD broker Pepperstone was founded in Melbourne, Australia in 2010 by a team of experienced traders with a shared commitment to improving the world of online trading. Pepperstone has grown rapidly in a relatively short time and is now one of the largest MetaTrader brokers in the world. Over 300,000 traders around the world already trust the Pepperstone brand. A total of 1000+ tradable instruments are offered. In addition to 60 currency pairs, the broker also offers 14 cryptocurrencies, including Bitcoin, Ethereum, Cardano, Dogecoin, Ripple etc. for trading as CFDs.